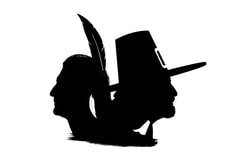 At the end of the first winter half of the Pilgrims were dead due to starvation, disease and exposure to the New England winter. Those that survived that winter did so in part through the discovery of caches of corn and beans stored by the local Wampanoag Indians, Indians who had died in an epidemic that had swept the Indian populations along the east coast.
The Pilgrims savior came in the form of Massasoit, the Sachem, or leader, of the Wampanoag.  Much like the Pilgrims, the Wampanoag had undergone a great deal of death and suffering in the form of epidemics that had moved through their lands, killing many in their settlements. The Wampanoag also lived under threat of attack by the Narragansetts, another local tribe. With both peoples in need of assistance, the Pilgrims and the Wampanoag formed an alliance to protect each other.
"According to English sources, Massasoit prevented the failure of Plymouth Colony and the starvation that the Pilgrims faced during the earliest years of its establishment. [﻿6﻿]"