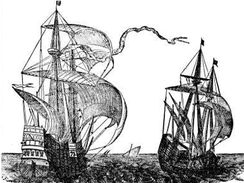 The Mayflower & The Speedwell

The Pilgrims actually intended to set sail to the Colony of Virginia with two ships, the Mayflower and the Speedwell. The Speedwell was the smaller of the two. She was built in 1577.  Initially she was named the HMS Swiftsure.  She served in the Royal Navy and took part in the battle against the Spanish Armada in 1588. She was decommissioned in 1605 and renamed the Speedwell. The Speedwell was purchased by Captain Blossom, a Leiden Separatist, in July, 1620. Later, he chartered the Mayflower.  Prior to the voyage the Speedwell was refitted with two new masts.  This was possibly the reason for the Speedwell later taking on water.  It was also believed the crew may have purposely created this issue. After two failed attempts to begin their voyage, with the Speedwell proving unreliable, the  Pilgrims were forced to return to Dartmouth and sell the Speedwell.  Eleven people left the Speedwell and boarded the Mayflower. Twenty people returned to London.  Prior to the problems with the Speedwell, the plan was to leave in late July. Ultimately, on September 6, 1620, one hundred two passengers, and a crew of about thirty,  boarded the overcrowded Mayflower for their expected journey to the Colony of Virginia. They were already about a month and a half behind schedule given the time attempting to repair the Speedwell.  This lost time would prove to add to an upcoming deadly winter where essentially half of them would die due to starvation, sickness and exposure.
"During the winter, the passengers remained on board Mayflower, suffering an outbreak of a contagious disease described as a mixture of scurvy, pneumonia, and tuberculosis. After it was over, only 53 passengers remained—just over half; half of the crew died as well. In the spring, they built huts ashore, and the passengers disembarked from Mayflower on March 31 [O.S] March 21], 1621.[32]"
Source: Wikipedia